Radio relay lines can be considered as alternative to wire communication lines. They can replace wire communication practically in all cases, and fibre-optical – in very many cases. Application of DRRS in those places where lining FOL is impossible, for example in the conditions of dense city building or, on the contrary, at considerable remoteness from communication highways becomes very actual. It is necessary to note such possibility of radio relay lines application as the communication in remote areas. Different types of data can be transfered over the RRL: DTV, Internet, telephony, raw data, etc.

PJSC “ROKS” develops, manufactures, and installs direct visibility RRL equipment which work in the most different parts of MW range.

The "ROKS" company offers a family of digital radio relay stations (DRRS) on which basis the radio relay lines of various shapes and lengths can be built. Frequency bands:

Systems in a frequency band 1.7 … 4.2 GHz can be used for operative supplying of information transmission (the reporting from places of events: concert halls, boardrooms, venues of sports and mass actions, and also in video observation systems) on mobile television station or is direct in studio which than 10 Km from a place of event within line of sight.

Systems in a frequency band 7 … 15 GHz are intended for organization of one- and multi-span radio relay lines on the general using networks. The digital information is transferred with rates 2.048 Mbps, 8.448 Mbps, 34.368 Mbps by transfer of synchronous digital streams and with transport streams MPEG-2 rates that equal multiple 6,222Mbps at digital TV signaling.

In a frequency band 7 … 15 GHz depending on system execution the range of action on one span of a radio relay line is equal from 25 Km to 40 Km within line-of-sight conditions.

It is possible to build radio relay lines of a various configuration:

- radio relay lines with a simple radio trunk on one stage consisting of two terminal stations and the elementary control systems;

- radio relay lines with a compound radio trunk on a few stages, consisting of two terminal stations with a difficult control system providing allocation of digital streams at intermediate and terminal stations; 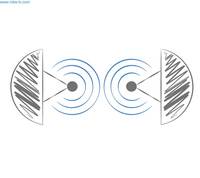 A link can replace a wired line. It is very reliable connection type, especially in hard environmental conditions, where cables can not be applied. 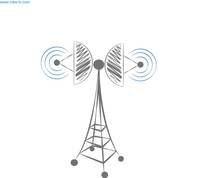 This RRS family intended primarily for transmission of multi-frequency group signals consisting of several carriers, modulated by the multiplexes of digital TV programs.