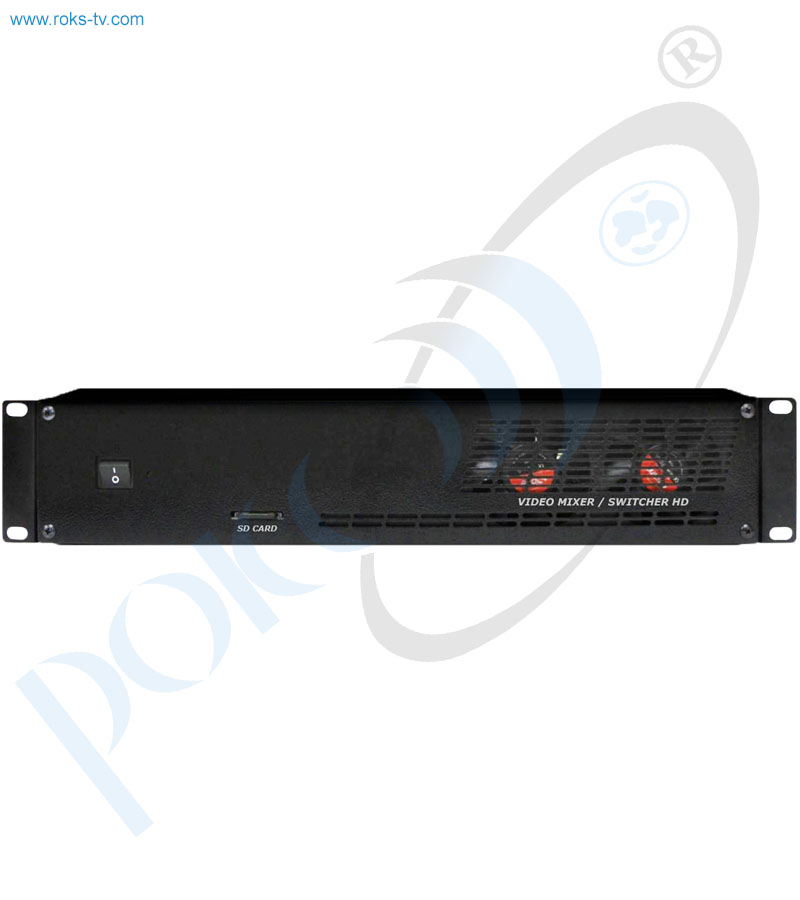 • Design of Video Mixer / Switcher HD
The mixer is available in two versions: the first version is structurally designed in the typical for professional use form – main unit (the vision mixer) and control panel (the console). The second version - is the portable mobile video studio (both the vision mixer and the console is included in one case).
Physical Installation of the main unit is 2 Rack Unit Size.

• Properties of Video Mixer / Switcher HD:
Built-in MultiView. The multiview output allows you to see all 10 inputs of video, 2 video players and 2 built-in still pictures on a single HDMI TV / monitor or SDI monitor! You can see all of your cameras, TALLY indicators, graphics, preview and final program output all on the same display at the same time. In addition, the Multiview has indications of the input and output analog and embedded SDI signals of the sound levels. Menu (OSD) can be displayed on the Multiview also. You can switch on and operate the menu (OSD) from the control panel.
Picture-in-Picture effect (PiP). It is possible to enable the PIP presets, which are the combination of up to 4 windows included in the background.
It is possible to change the following smaller windows settings: size, crop, edging color, border width, position, sources for smaller windows and for backgrounds).
All settings of the PIP presets are made and stored in the "Switcher Contol" software from the PC.
4th PIP presets are written in the non-volatile memory of the switcher and saved during restarts.
4th presets can be enabled using the PIP1/PS1...PIP4/PS4 buttons.
It is possible to change the sources in the PIP windows from the control panel, and quickly turn on or turn off the PIP windows either on the Preview or on the Program.
Two independent Logos. 1 Logo can be dynamic. Total 8th logos can be uploaded from the PC in the vision switcher non-volatile memory and then to assign on independent buttons "Logo 1" and "Logo 2".
Each of the logos can be placed on the screen in any needed position using "Switcher Contol" software from the PC .
Logos can be changed from PC and from console of the vision switcher.

Taking into consideration that we (ROKS PrJSC) are developer and system integrator, also do not stop on our technical growth and improvement, know that view of all our devices and equipment including their technical parameters may be different from pictures presented on website and parameters listed on each device webpage.
Note! All details customer has to confirm in advance during ordering and before payment. Those parameters that were not specified and / or were not agreed while ordering will be implemented as basic at the discretion of the manufacturer. Each our customer has 1.5 year warranty and 7 year aftersales support for whole range of our products.