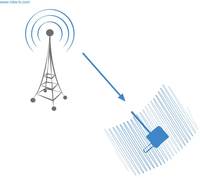 Request MMDS (Multichannel Multipoint Distribution Service) is traditionally referred to as "cable TV with no cable". It means MMDS uses everything the same as in traditional cable TV but as delivery medium instead of cable it uses radiowaves.

MMDS (Multichannel Multipoint Distribution Service) is traditionally referred to as "cable TV with no cable". MMDS system has a limited number of channels, which involves the use of relatively low frequency range of 2.5 -2.7 GHz and occupies frequency bandwidth of only 200 MHz. The maximum number of TV channels within bandwidth of 6 MHz depends on channels bitrate and can reach 20+. Video signal, transmitted in such a system, is similar to traditional broadcasting systems in the VHF and UHF bands which has the amplitude modulated by video signal carrier. For this reason, analog MMDS systems require relatively high-power linear transmitters. In the transition to digital broadcasting the existence of such linear transmitter is very useful because in digital MMDS signals are used standards DVB-T and DVB-C which also require a linear mode of transmitter operation. DTV coming greatly improved the abilities of MMDS - now it is possible to transmit more than 100 DTV channels in 200 MHz range.

For MMDS systems we recommend a proprietary architecture that allows you to use few relatively low-power transmitters with the individual transmitters signals frequency division multiplexing instead of one powerful transmitter in propagation medium possibility (the Ukrainian Patent № 54644). We also offer a new system architecture that allows you to eliminate areas of shading, resulting in transmitting signals to the multi-carrier TV system MMDS. The proposed co-channel repeaters are more efficient than traditional Gap Fillers (the Ukrainian Patent № 54275).